From across the open, glass-walled atrium, sitting in a large, but strangely uncomfortable chair, I watched the door across the hallway open. My heart tried to beat faster, but couldn’t work up the enthusiasm.

A large woman wearing white backed into the hallway, her feet encased in white canvas-and-rubber shoes that squeaked every single time she took a step on one of the institutional white tiles lining the corridor that separated the family waiting room from the now-open door.  After one long step, she turned left and I saw she was towing what turned out to be a metal stretcher.

Formed of shiny metal and well-oiled, squeak-free wheels, the stretcher normally carried a thin, plastic-encased mattress and several starched, white sheets. I’d seen the stretcher and the woman go into the room just a few minutes before. I couldn’t say I watched it because that would have implied some conscious decision on my part and that. . . Well, that just wasn’t happening.

Thoughts skittered through my brain, none sticking around. I existed in the moment, seeing whatever was in front, sounds and smells that drifted by, but all of it in and gone.

Unable to muster the enthusiasm to look away, I saw the large woman extract the stretcher from the room, a second similarly white-clad woman following behind, her right hand guiding the stretcher into the hallway.

On the stretcher, a rumpled white sheet pulled up to just beneath the chin, rested a still, small woman. Despite the face being uncovered, the woman on the stretcher was very clearly dead.

Moving efficiently, the two women wheeled the stretcher and its contents away down the hall and around the corner.

It came to me that the body on the stretcher had been my mom.

A Multiple Sclerosis Diagnosis Was Just The Beginning

Diagnosed more than three decades before with multiple sclerosis, Mom fought throughout most of her life. Multiple sclerosis is a degenerative disease that wore away at the neurons in her body, robbing her tactile sensations, stealing away her strength, and, most noticeably, the ability to move her right leg. 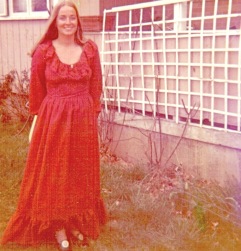 Mom developed simple way of dealing with MS. She fought against it with every single minute particle of her will and strength and anger. She did not give an inch. She knew that, if she gave that first inch, the next would be given easier, and the next one even easier than that. She gave the disease nothing.

Everything MS took from her, it fought, snuck or tore away. She never gave an inch.

When she was diagnosed with an aggressive, fast-moving form of breast cancer, she faced it down like she did MS. She underwent chemo, a mastectomy and accepted her body for what it was.

She gave a breast, but she never gave an inch.

If you didn’t like her, you probably hadn’t met her. Because once you met her, you really had no choice but to like her. Mom’s personality filled every single room she entered. She loved to be around people, to talk to people and she was damned sure not going to let MS keep her from doing that.

We all — including the seventeen people who would later tell me she was their best friend — felt the impact of her personality. She was ten feet tall and bulletproof. And that was before she started drinking the tequila.

In life, she was a big, friendly giant.

In death, she was a tiny lump on a very large stretcher.

I turned, realizing my butt had already fallen asleep in the two-seater couch, and put my arm around my sister. We leaned together, my bald head nearly bouncing off the thick head of hair framing her blotchy face.

Leslie, only eighteen months younger than my 46 years, had born the brunt of the last month since she lived an hour away.

She wiped at her face and leaned back, wincing.

“Of course we did,” she said. “Besides, if we hadn’t let her die, she’d have killed us both for it.”

She Meant Every Word

“I want you to know something,” Mom said. She looked up from her seat at the kitchen table. Tired couldn’t begin to describe her. Deep half-circles of purple weighed heavily under her eyes, the result of forcing herself out of bed every morning despite not sleeping the night before. “If you ever find me dead. . . If I ever commit suicide, I want you to know it had nothing to do with you or your sister. Or even your dad, the shit. I shouldn’t say things like that about him, but I— If I do commit suicide, it’ll be because I’ve just had enough of this damn disease. Nobody else. Just the MS.”

I’d nodded, leaned down to hug her briefly and asked if there was anything I could do. She smiled and waved me on my way. It was summer and the Fretz Park Pool was calling my name.

Although she’d never come out and said it so bluntly before, that wasn’t the first time Mom had brought that up to me or Leslie. Looking back, I can see she was having an especially rough summer, even on top of my dad leaving her for the first time. They would get back together after a year or so, stay together for another couple of years and finally divorce after my dad walked out yet again, this time for only one other woman. The Dallas heat and the emotional pain made it harder to deal with her MS.

Suicide was her escape hatch from a burden too heavy to bear. It wasn’t the pain that worried her. It was the helplessness.

What Finally Got Her In The End

Mom lived in a single-floor home in Gainesville, FL, with her two cats, both rescued from the shelter. Those cats were part of the daily test she set for herself. She fed and watered them, and changed their litter box. They gave her another reason to fight. She loved them and they loved her.

And they killed her.

Pasteurella multocida is a Gram-negative, nonmotile, penicillin-sensitive coccobacillus found in most domestic housecoat claws. It’s not a big deal, normally. Most folks with a healthy immune system can easily fight off the bacteria.

MS is an autoimmune disorder that causes the body’s own white blood cells, which fight infection, to turn on the insulating lining of nerve cells. People with MS are immune compromised. They do not have a healthy immune system.

When Mom passed out in the bathroom on Feb. 02, 2011, she fell and got stuck between the toilet and the wall. Trapped there for most of a day, she couldn’t escape or call for help. Eventually, she was found by my grandmother and her helper who were worried when they hadn’t heard from Mom all day.

They patched her bruises and cuts, gave her some fluids and helped her to bed. The next day, they forced her to go to the hospital to be examined. The doctors immediately demanded she stay overnight, to be rehydrated and, maybe, other things depending on test results.

I talked to Mom that night. Scarlett called me from the hallway where my mom rested on a stretcher, waiting for a room. Scarlett filled me in on the fall, the toilet and the hospital. My mom, true to form, hadn’t wanted to worry anyone so hadn’t told anyone.

Other than her head and neck hurting from the fall, she said, she felt fine. She didn’t sound fine. She sounded loopy. Still, I attributed that to her being dehydrated. I said I loved her. She said she loved me. We hung up.

That night, Mom fell into her first coma.

I arrived from Charlotte, NC, around two am that night. The first of many trips from here to there I would make that month.

The doctors stashed Mom in intensive care, wired her up to a Frankensteinian tangle of wires, tubes and monitors that went beep. The medical establishment offered no indication of what was causing her coma, how long it might last or if she would come out of it at all.

Leslie and I agreed to testing, but stressed Mom’s desire for no heroic measures. Despite numerous tests, doctors stayed baffled. They flooded her system with powerful, broad-spectrum antibiotics on the theory of “What the hell, it can’t hurt.”

Four days after Mom fell into her coma, as Leslie and I were discussing when we might have to leave, what kind of set up we could put into place, we walked into Mom’s hospital room to keep talking to her, trying to engage her and bring her back.

Instead, we opened the door and found Mom sitting up in bed, eating.

She Saw Us, Smiled And Said, “Well, Hey There!”

It was the most normal-sounding thing in the world. She sounded like she’d just woken up in her own bed and was surprised to see my sister and I just wander into her room for no apparent reason.

It was the best and most coherent she would sound for the rest of her life.

The doctors had finally figured out what was going on. Mom had meningitis, an infection of the brain and spinal column. It caused swelling of the area and, left untreated, could cause death. The major symptoms of meningitis are a headache and a stiff, sore neck.

The doctors couldn’t figure out what was causing her medical issues because they never thought to look for pasteurella multocida. Why would they? After all, in the history of, well, history, Mom was only the ninth person recorded to have contracted meningitis from pasteurella multocida. So they pumped her full of even more antibiotics and hoped for the best.

Hope, as a medical treatment, stinks on ice.

Leslie and I leaned on each other and stood firm. No heroic measures. We followed Mom’s

He wouldn’t agree. At which point, I brought out my phone and began dialing the Orlando offices of Sharon Stedman, attorney at law, to discuss our case against the hospital and the chief of ICU in particular.

The shit weasel saw the wisdom of following a previously approved, legally obtained Do Not Resuscitate (DNR) order. And I saw the wisdom of not phoning the attorney. Of course, I did phone the attorney as soon as I left the weasel den. After all, the attorney is my aunt, Mom’s sister, and had been demanding an update on Mom’s condition. Sharon is an attorney, though only works on appeals cases.

Eventually, though, we came to a crossroads. We wanted Mom in a rehabilitation hospital, away from the quacks who wanted to harm her in the name of helping her. Provided Mom could show she was on the mend, that she could swallow her own food, we were golden.

All we needed to get Mom into that rehab hospital was for her to swallow some Jell-O on her own. Just swallow it down. Tasty. Yummmmm.

Mom failed the swallow test. And failed again. And again.

More to come tomorrow. Until then, be good to yourselves.

One thought on “In Requiem: Death Sucks”